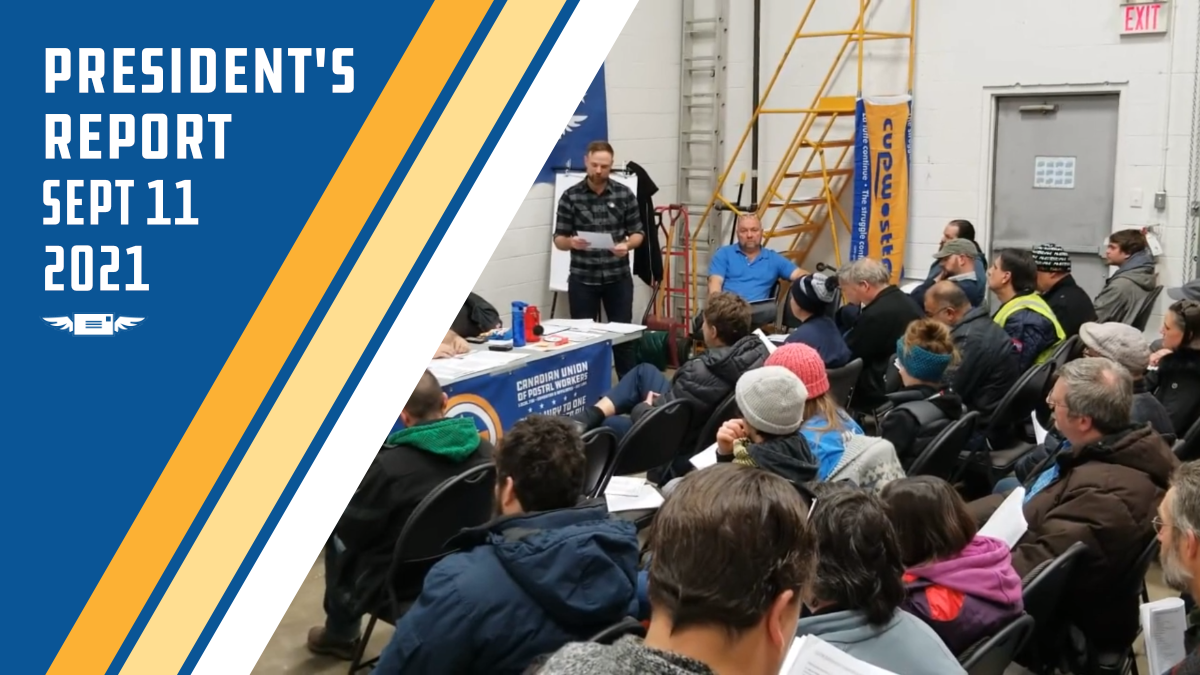 The Membership Is Always Right

The contract extension proposal has concluded with the YES vote winning. A big thank you to all the members that contributed their time to the democratic process of our union. The more of us that get involved and informed, the stronger we all are collectively. Regardless of outcome, this experience has provided our union with many important lessons.

When the extension proposal was first announced, our local executive decided we would oppose the National Executive Board (NEB) recommendation because we felt it was strategically shortsighted and it undermined the authority of our membership. We had no illusions about the long odds we faced to succeed but primarily wanted to use the opportunity to make our case on what a union should be, to pressure the NEB to develop more of an organizing strategy, and to find other allies across the country who also believe that CUPW needs to be drastically reformed. As expected, we lost the vote but accomplished our other objectives. Thank you to all those that had the courage to demand accountability from a leadership group that went completely unchallenged in most other locals.

Within the next two weeks the audited vote results will be released breaking down the totals for each local. I suspect these totals will show that participation was lower than the 2016 extension turnout (25%) and that anywhere the NO campaign was active the NO vote was substantially higher than where it wasn’t presented. Even if you voted YES, this is important information to consider for two main reasons:

1. Sentiment: When our local conducted a referendum back in September 2019 on whether or not we should adopt a strategy to defy back-to-work legislation, both sides of the debate were detailed and it was made very clear that there was no desired vote outcome or recommendation. The reason it was presented this way was because it would not benefit our local to build a strategy based on members making decisions after only hearing one side of the argument. The same logic should be considered for the extension vote.

If, as expected, the NO vote performed better where it was given equal opportunity to make their recommendation, what does that say about the strength of the YES argument and how members actually feel when presented a full picture? By not allowing a counter-perspective to be offered to all locals, the NEB robbed itself of a more accurate sense of how membership actually felt and what we were willing to do. Without gauging proper sentiment, we are building a plan based on wishful thinking not solid information. This is especially dangerous as a labour union because the only real leverage we have is the certainty, not speculation, of the mass willingness of our members to act collectively.

2. Engagement: This vote had serious implications for the future of our jobs. That likely less than 25% of our members could be encouraged to participate reflects a critical communication and credibility problem with our union, at every level, in every local, including our own. A crisis in belief in the union is not the fault of the member but of our union in failing to give the member something to believe in and engage with, and it is our responsibility to win them back.

With such a low level of engagement the only constructive conclusion that can be drawn about this vote is that an overwhelming majority of our members do not believe in the union enough to be involved and that there was no mass support for either extension choice. Again, a union without an active membership has no leverage to accomplish anything, let alone actually making our jobs better.

The results of this vote should raise concerns for every union supporter participating in the extension, YES or NO, because it shows just how weak CUPW has become. Hopefully, this alarmingly low turnout is the wakeup call needed to convince more locals and other levels of the union to change course. The NO campaign was very successful in getting the NEB to centre the importance of organizing to re-engage members and the need to develop capacity over the next two years. Whether those NEB platitudes were sincere or not, this bell cannot be unrung, and it is now open season to relentlessly apply pressure on our elected union officials until satisfaction is delivered on this promise.

Either this organization develops a committed plan to build a workfloor presence and collectively empower every single local over the next two years or I fear CUPW will be past saving. We are quickly running out of time to reclaim the legacy we love to reminisce about. Expanding services into public postal banking, internet and food delivery will be the only things that secure our future. Make no mistake, we will never win these expansions without a strike, and no strike will be successful without an actual plan to face down back-to-work legislation. If we are expecting to survive another 15-20 years at this job on soon-to-be-extinct letter mail and low-profit-margin parcels without embracing the reality of the struggle ahead, we are in for a rude awakening. If we are to survive and flourish, our union must change how it fights.

Fortunately, the blueprint for effective labour unionism has been around for over 100 years and is only as far away as our willingness to utilize it:

1. Mass Recruitment: When we initiated frequent workfloor meetings in Edmonton & area back in 2019, the reception was not friendly. We couldn’t clear most workfloors to participate, and those attending were more interested in criticizing union officers for being absent rather than hearing what was on offer. By about the third round of visits, we started winning members around to the sincerity of our efforts and drawing near full attendance.

These meetings were not just for the sake of showing our face or sharing news; each meeting made the case that the union was only as strong as our members are involved and would directly invite members to specific organizing educationals and events. It cannot be stated enough just how much more interest is generated in taking a training course from delivering persistent, workfloor appeals instead of mailing out a bulletin or making a website post.

If the NEB is serious about building capacity, they can start by interviewing workfloor representatives from each local to get an honest evaluation of what they think of their execs, how often, if at all, the local actually runs organizer training sessions, and where union communication and involvement breakdowns occur. This can be further supported by a survey of all members on what the union can do better to improve as well as forming a nation-wide task force made up of local leaders enthusiastic about building a national organization strategy.

2. Mass Education: The main reason our union is weak is because it reinforces a top-down procedural mode of activism which is not only ineffective but discourages our members from commiting to the struggle. For example: if the company does something wrong, the traditional way activists have been trained to fight back is to obey in the moment, collect paperwork, and file a grievance later. The infraction then becomes a matter of some legal proceedings months or years down the road. This process was designed to displace frustration and demoralize workers by keeping them from directly fighting back to confront their problems.

The antidote to this is deliberately, and persistently, training and empowering workers to collectively organize their own workfloors to demand change. Like anything, this skillset is not a spontaneous switch that can be flicked on at will, but must be taught widely in order to be effective. Beyond building confidence and capacity, mass workfloor organizer training is the invitation to inspire our members of the potential of the union and why they should believe in the struggle. This advocacy, more than anything else, is the reason we’ve seen more involvement in our local on every front and why so many new members are getting involved. There is a direct correlation between how many workfloor meetings and organizer training courses we have, and the amount of members wanting to be involved in the union.

If the NEB is serious about preparing our members to fight back and succeed, every local not already investing heavily in organizer training will need encouragement from other levels of the union to get started. The NEB had plenty of time to spread out between every region and local to sell this contract extension. Now, they can make good on their claims of wanting to prepare our members over the next two years by spending that time meeting with local execs to help convince and support them in budgeting, and deploying, workfloor organizer training courses.

3. Perpetual Support: The Building Power To Win (BPW) campaign initiated by the NEB last year was a lesson on how campaigns need proper resources to succeed. When it started I told our local coordinators that, although it was not likely to receive the support it needed, it had good ideas that we should push as far as possible. In hindsight, as under-supported as the BPW campaign was, it didn’t fully derail until the NEB agreed to private talks with CPC about the extension. Whether intended or not, this drastic shift created a lot of ill-will with activists who extended their trust to the NEB to help with this campaign.

A political leadership group is only as good as the sincerity of their claims and efforts to follow-through on those claims. If the NEB doesn’t believe in empowering workfloors, fine, they should be honest about that and tell members the only thing they have to offer are arbitrations and court appeals. If they do believe, however, they must spare no expense or effort to develop a strategy to invest, at minimum, just as many resources into organizing coordinators and trainers as they do grievance worker advocates.

If the NEB is sincere in their claims, they should properly commit to the BPW campaign. BPW has tremendous potential value and should be reset and expanded with members applying for organizing coordinator positions in every region and large local. The scope of this campaign should also grow beyond mapping and surveying workfoors to also recruiting and training workfloor activists. Once trained, liaisons should be coordinated into region-wide organizing committees so that locals can support each other’s cross-actions and mini-cross-campaigns. Want to fight SSD, a bad restructure, or force CPC to give us proper Group 1 staffing data? Imagine training and empowering multiple locals to coordinate job actions together to do just that. No more waiting every four years to solve our problems at bargaining; the time between can be the necessary battles where we refine our gameplan, and build up our confidence so when we do get back to negotiating public service expansion we have the means and credibility to fully see it through.

Every one of these steps can be put into motion as early as this October if our NEB leadership is sincere in their claims to properly prepare our membership. If the NEB is committed to revitalizing this union, our local will be one of the first to enthusiastically support that direction. That said, we will not be waiting to see what develops. We’ve long known what it will take for this union to win and we will do our part by leading by example and encouraging and supporting any other locals committed to doing the work that needs to be done. Let’s get to it.