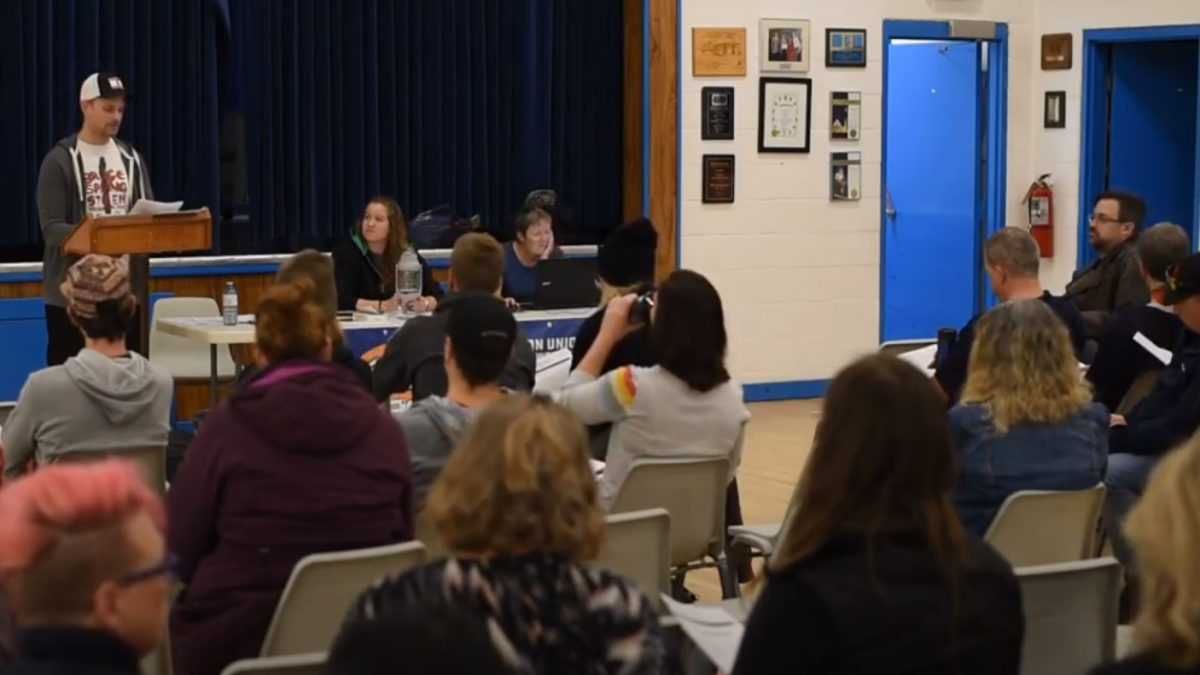 At our last GMM we had one of the largest turnouts in the 15 years I’ve been with this local. Having 116 members attend a GMM is something worth celebrating because it shows that an organization is healthy: it means elections and policy proposals are less likely to go unchallenged and it means that members are realizing just how important their involvement is in determining the direction of our union. The Oct 6 GMM was another tremendous test of our fledgling movement as we debated whether or not to further invest in the very workfloor organizing and outreach strategy that is responsible for the momentum we are witnessing. The motion was carried almost unanimously by the 75 members present.

Word of our local’s revitalization is spreading throughout the rest of our union. Our National VP in charge of education, Dave Bleakney, told me that he wants to circulate a series of national bulletins promoting the organizer training programme we’ve launched which would also highlight all the resulting job action. Our Regional education officer, Dave Lambert, will be visiting me October 22 to finalize a proposal to roll-out our workshops to the rest of the Prairie region. On Oct 9th, I had a conference call with members of the Toronto executive who are excited to replicate exactly what we are doing here. Similar arrangements are coming together with the Royal City and Vancouver locals and I hope to be talking with them before mid October. Postal workers throughout Canada are hungry for change, and the efforts of all the activists in our local are resonating as an answer.

Of course, every step we take towards empowering our members is met with pushback from Canada Post. Our campaign against the fraudulent restructure system at Depot 2 culminated with a willingness to resist systemic overburdening and short staffing across the entire local. The only thing stopping letter carriers from going the distance to cancel the restructure was the threat of the back-to-work legislation fines hanging over any work stoppage. Even then, there was a willingness to fight -- as long as we had the adequate support to do so. With that I was tasked with conducting a referendum throughout the local asking members their thoughts on the legislation. At the Oct 6 GMM, I shared the results of that referendum in the form of open letter I sent on Oct 10 to our National Office and our labour allies in Canada. Following is the cover page to the National Executive Board as well as the open letter in its entirety:

To our friends in the CUPW National Executive and the rest of the labour movement,

There can be no denying that the size and power of our movement has been in steady decline for at least the past 40 years. Some of this has been attributed to changes in industry but if we’re being honest with ourselves it has more to do with our unwillingness to strategically counter the aggression and ruthlessness of employers and government. Everywhere in Canada, workers are under attack, whether it’s General Motors violating its own plant non-closure commitments, Ford’s massive cuts to education in Ontario, or Kenney’s attempts to break collectively bargained contracts in Alberta. The powers that be will break any rule to further their agenda knowing that we won’t do anything to meaningfully challenge them.

Our union was reminded just how powerless we’ve become when we were legislated back-to-work this past December for the 5th time since 1985, despite the supreme court ruling in 2017 that Harper’s similar 2011 legislation was unconstitutional. The message is clear: workers in Canada have rights until those rights become inconvenient to the powerful. Now, our members are asking uncomfortable questions like: why do we even go on strike if we just end up getting legislated back, and what’s the point of even being a part of a union if it won’t fight when we need it most? In fairness, we’ve never received a straight answer to these questions, only rumors that the previous National Executive (of which many of you were a part of) didn’t want to risk going against the legislation because (quote) “members weren’t willing to fight”. Also, in fairness, how do we know how the members feel without actually asking them?

In Edmonton, we took these concerns to heart and held 25 workfloor meetings between Sep 4 - Oct 3, 2019 to ask our members a very simple question: if you knew you had the financial and legal support of our National Executive, support from others in the labour movement, and the mass majority support of our own local, would you then be willing to defy back-to-work legislation in order to improve your working conditions? Of the 939 members attending these workfloor meetings, 83% of them (787) voted ‘Yes’.

This question was not asked lightly, and it was made clear there is no wrong answer. It is no small thing to challenge the law and doing so is only possible if enough people have lost faith in the ability of the system to treat them fairly. In the mid-1900s, unions in Canada traded the possibility to strike at will for the procedural rights of the collective bargaining and grievance systems; what has come to pass are employers deliberately violating our collective agreements and governments legislating against our ability to bargain. In doing so, the ruling class broke the social contract for labour peace and declared open war on the workers of this country. We, in the labour movement have not yet adjusted to this reality and are still the only players committed to the rules of a game where everyone else is cheating, and winning, at our expense and with impunity.

The postal workers in Edmonton are not inherently more radical than postal workers anywhere else. The only difference between us and our comrades throughout Canada, is that Edmonton postal workers were actually asked what we were willing to fight for and to what extent we were willing to go. I will be inviting other CUPW locals to join Edmonton in initiating their own defiance referendums and encourage our National Executive to support all remaining locals to join along -- let the membership decide! Within the next couple weeks, I also look forward to discussing with the whole National Executive what you are willing to do to support our members in Edmonton now that we’ve clearly voiced our willingness to fight. Edmonton expects you to be behind us and awaits your response with great enthusiasm.

Last December, other unions offered their solidarity if we were willing to defy the legislation because they know that back-to-work legislation is not only an attack on postal workers but on all workers, and they look to us to lead the way. This kind of draconian government interference will not stop until a union someday, somewhere draws a line in the sand. No matter what happens in our arbitration, back-to-work legislation inevitably waits for us next time we dare to assert our right to collective bargaining.

Edmonton has spoken: let us be the spark, let us be the tip of the spear! If Edmonton alone fought this legislation the legislation could never hold, nevermind if we had the support of other locals, our entire union, or the rest of the Canadian labour movement behind us. If we stand together we will break this unjust law and usher in a new era for the labour movement in Canada. An injury to one is an injury to all! The struggle continues!

In solidarity on behalf of the Edmonton Local,